Are you someone that pulls the plug on a relationship when things start to get serious no matter how 'perfect' your potential partner might seem?

Self-sabotage in romantic relationships is a common problem and now researchers are investigating the psychology behind why some of us do it.

An abrupt and traumatic break-up at age 19 was the catalyst for Kahlee Cummings' decade-long cycle of relationship sabotage.
The far north Queensland mum is now engaged to her 'dream man', but said she still fought the urge to sabotage the relationship almost daily.

"It's something I'm working on," she admitted.

"In the past I was telling myself I wasn't letting anyone into my daughter's life to protect her, which I was, but realised I was mostly [ending relationships] for self-preservation."

The beauty therapist said she would look for any excuse to get out of a relationship as soon as things started to get serious.

"Instead of focusing on the positive I was searching for negatives so I could end the relationship, [it was] usually between the two-and-three-month mark," she said.

"I wanted to be the one to end things before I could be hurt again.

"There were men that were incredible that came into my life that would've made amazing partners, husbands and fathers but I wasn't prepared to give them the opportunity."

Raquel Peel, PhD lead researcher at James Cook University, said little study had been done in the field of psychology on people who could successfully start relationships, but not maintain them.

"Self-sabotage is a strategy people use to protect or enhance themselves and it's not uncommon," she said.

"Short-term, self-sabotage can provide the illusion of control over the environment and bolster a person's sense of self but long-term it undermines those same things."

Ms Peel said while the study was ongoing, so far it looked as though our past plays a key role in how we handle adult romantic relationships. 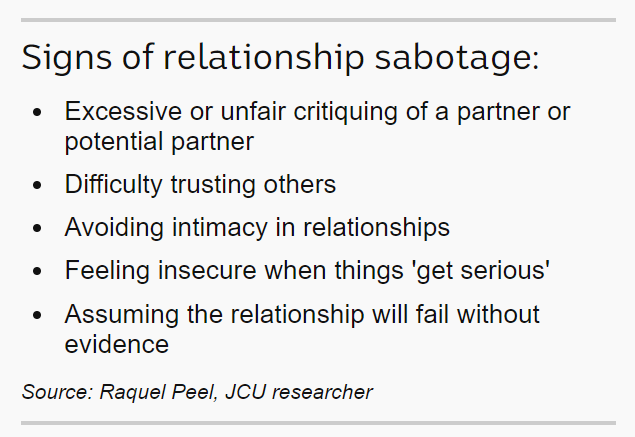 realise what they are doing.

How to stop the cycle

Ms Cummings said she realised her pattern of continual relationship sabotage at age 19, but couldn't stop.

"I don't think I have overcome it myself," she said.

"I'm lucky to have such a supportive partner and I explained to him what I do and why I do it and he's able to constantly convince me that he's not going anywhere and it's okay."

The mother offered advice to other men and women facing similar situations.

"Everyone has different reasons for being the way they are but you need to be self-aware, you need to think about if you are doing this," Ms Cummings said.

Ms Peel said her research so far supported the idea that self-awareness was vital to stopping the pattern of relationship sabotage.

"You need to be aware of the behaviours you bring into a relationship," she said.

"I am starting to narrow down a lot of common behaviours, a lack of trust and criticism, they are small behaviours that can go a long way to [sabotaging] a long-lasting relationship."

This site uses Akismet to reduce spam. Learn how your comment data is processed.

I am an internationally recognised TEDx speaker, an emerging researcher, and passionate lecturer.

I work as a Psychology and Counselling Lecturer at the University of Southern Queensland.

I am interested in research on relationships, suicide, bullying, stigma, medical education and research methodology.

A highlight of my research includes giving a TEDx Talk on romantic self-sabotage. This talk has been well received globally and was featured in the TED series titled “How to Be a Better Human”.

I enjoy promoting scientific research to engage both academics and members of the general public, and I believe in creating awareness, promoting individual responsibility, and challenging people to act towards changing their reality. Overall, my work has received extensive media coverage including TV and radio interviews, newspaper articles and publications on The Conversation, ABC News and Psychology Today.

My work as an educator has been recognised with a prestigious Inclusive Practice Teaching Award. I am also passionate about raising awareness of mental health in higher education and have developed the Mental Health Program for Higher Degree by Research Candidates for JCU.

The Raquel Peel Editorial Team is composed of writers who contribute to this site’s overall message. It is our mission to help and inspire individuals to pursue and maintain healthy and loving relationships.